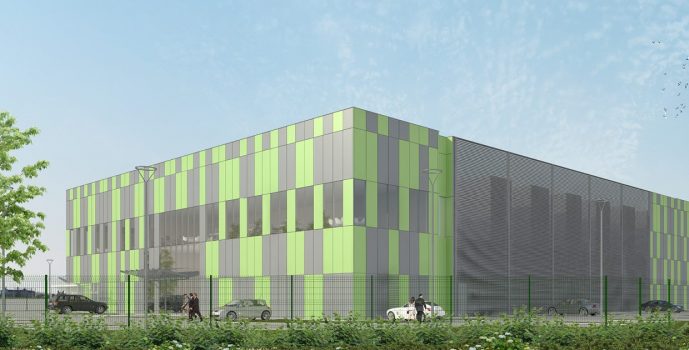 Co-founder of Reid Brewin Architects, Adrian Brewin, was interviewed by DataCentre Dynamics magazine recently, as part of a feature looking at sustainable construction. While some of the ‘best bits’ were chosen for the final piece, here’s a little further insight into what the pair talked about…

It’s easy to assume that large data centre projects automatically come with a colossal carbon footprint as standard. But, if you remove the operations element of any such site, the size of the space is similar to any warehouse – it’s a big, empty box.

Where the ‘damage’ is done – or prevented – largely comes down to the choice of materials used during construction, which can be ‘better or worse’ depending on the nature of the site, its location, and whether there are any special circumstances to consider, such as the use of geothermal or photovoltaic panels.

Where it really changes though, is the overall lifetime impact.

There’s no getting away from the fact that a significant amount of energy is used to drive the computers and their cooling systems, alongside incidentals such as lighting. So, if we can reduce the impact in other areas, we really should.

In context, a house might require a 12kW power supply, drawing energy from a local substation – along with its neighbours. Yet, the resources needed to operate a warehouse can vary wildly and may be closer to 75kW, potentially with its own medium voltage substation. A large data centre, meanwhile, could be somewhere in the 40MW+ range, demand a dedicated high voltage substation – the size of which would be capable of supplying a small town.

Let’s not forget either, that a building’s carbon footprint is also impacted by the fast-changing technology. Computers are replaced – on average – every three years, and the building may need a major refurbishment after 30 years. Add to that the support infrastructure – such as cooling systems and back-up generators – which would need an overhaul every 10-15 years, and you soon start to see the numbers stacking up.

It’s not all bad, though, as attitudes to sustainability have changed significantly in a relatively short space of time. While cynics may argue this is largely down to a political/credential ‘tick box’ exercise, it is becoming a topic which is being addressed rather than ignored – which is key.

For example, we’ve seen an increase in demand for recycled materials – such as carpets made from recycled bottles – becoming more prevalent in recent years. Clients are much more conscious about the origins of materials too, and often chose to opt for a local supplier rather than see their goods travelling across vast expanses of land and sea.

There are ‘wins’ around the data centre equipment itself too – particularly when replacing old for new. Although I’d be surprised if recycling amounts to anything more than what applies to your typical car at present, surely there is a market for second hand, functioning, equipment?

Over the years, I’ve seen several solutions around heat recovery – suppling waste heat to nearby businesses, local housing, or greenhouses – and water management using local farms or even atop the data centres themselves.

Photovoltaic panels on the roof or above parking areas, innovative ventilation systems which are designed to cool computers for most of the year – rather than permanent use of air conditioning – and switching from lead acid gel batteries to lithium ion are all great places to start. And it’s this kind of innovation we should be embracing in the years ahead.