The principles of Vitruvius

Vitruvius is well known for outlining in his book ‘De Architectura’ the three essential qualities of architecture –“firmitas, utilitas and venustas” – that all things must be durable, useful and beautiful. 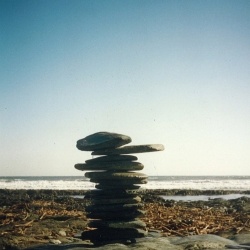 The task of an architect is to conceive spaces for a client. In order to do this we spend time drawing. This happens in many stages or phases in discussion with the design team and the client. In the beginning the drawings are simple but they become more and more detailed in order to represent the solution to the client’s request. The drawings allow the client to visualise their project and at the same time facilitate the contractor’s understanding of how to construct it.  From the drawn scheme the contractor must be able to construct the spaces as represented in the drawings.

The goal is that the modification of the environment demanded by the client becomes in reality, durable, useful and beautiful. The process of conception, to establish the design and the construction is never the same. Each building is a prototype and often the scheme stays on paper. Various examples of our projects give an indication of the diversity of our experience.

We try to avoid particular styles of architecture. Instead we study the brief and the programme to understand the opportunities and the constraints – all this within the time and budget. We aim to maximise the advantages and work efficiently for the long term vision of the project as well as throughout the design and construction phases. Often the client’s vision doesn’t correspond to the architect’s vision and it’s that is when our specialist skills come in. We have created a serious business workind environment, ready to deal with any subject as it arises with open discussion and competent people around the table.

Contact us or pop in and see us to really understand the advantages of working with us.

Why do we consider this principle so important?

Vitruvius was the author of a one of the most celebrated architectural treatise – De Architectura. In his book he presents an encyclopaedia of the techniques of the ancient Romans. According to him, architecture is science which has been acquired through practice and theory. The architect must have a thorough knowledge of geometry, drawing, history, mathematics and perspective. It’s an ancient architectural text which is still relevant today and to which all current architects owe a great debt. 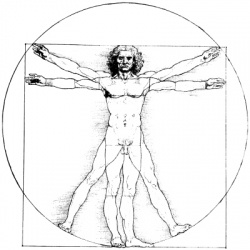 According to Vitruvius, architecture is an imitation of nature. As the birds built their nests, humans learnt to construct their homes from natural materials to shelter them from the elements. In perfecting the art of building, the Ancient Greeks invented the architectural orders: Doric, Ionic and Corinthian. These orders gave their buildings a sense of proportion, both in relation to themselves and also to that great masterpiece: the human body. Vitruvius defined the proportions which were later famously drawn by Leonardo da Vinci and which describe the fundamental principles of geometry and the proportion of the human form. This theme was revisited by Le Corbusier when he proportioned buildings according to the dimensions of the human form, but he also brought to it the proportions of Euclid. He developed a measurement system based on the golden ratio in order to help him design, he called it “The Modulor”. 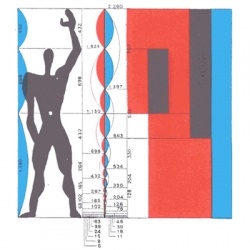 The Modulor is an architectural notion invented by Le Corbusier. It is a standardised human silhouette which he used to design buildings in relation to man, based on the golden ratio. For example the relation between the height of a man (1.83m) and the height of his naval (1.13m) is an average of 1.619m, or the golden ratio to the nearest thousand.

The height of the standard man (1.83m) is based on his observations of traditional European architecture and how this proportion can be used to develop harmonious architecture.