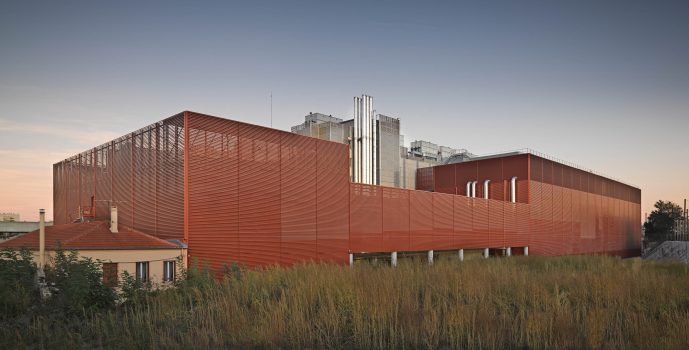 Promotional video for the Global Switch Data Centre at Clichy 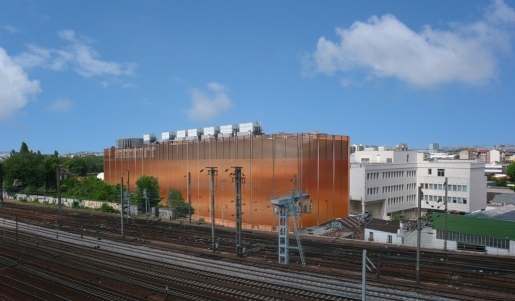 This project for Global Switch is located in Clichy-La Garenne, to the north-west of Paris, between Passage du Puits Bertin and Rue Petit. The footprint of the building 2645m² and runs alongside the railway tracks heading to and from Paris St Lazare station. The project consists of two main buildings and a carpark. The new data centre building is 13 767m² and built parallel to the existing building. It has six levels, of which two are in the basement, and each level is divided into two spaces: one for technical equipment and the other for the server rooms. Adjacent to this is another independent building of 1000m², that contains the generators on two levels and an open air car park on the ground floor. The project is designed to give a uniform industrial character to the buildings so that they can integrate well within the surrounding context of the urban area. Beside the site, a new city park is also in the process of development.

The design of the façade 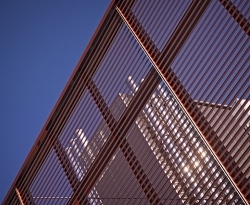 Louvres used on the façade

The façades are composed of thin copper horizontal blades known as louvres and manufactured by Renson. A sophisticated and technical treatment of this outer skin was felt appropriate in order to represent the high level of technology within this type of facility

The form of the building is clearly led by its technical and economic considerations. There are no windows in the elevations due to the carefully controlled internal environment and the high levels of security required. However the building must have ventilation, smoke extraction and pressure release valves. Consequently the building design is a closed concrete box structure with the necessary openings for the technical requirements, enrobed in louvred copper panels. The key function of the copper cladding is to provide an architectural statement about the technological function of the building and also a reference to the international prestige of the client.

Research on the type of façade focussed on references to the contents and usage of the building. Some key features arose from this thought process. Namely the need for removal of large quantities of heat created by the computer servers, the cooling aspect of the data rooms as well as the important electrical power supply necessary to run the technical equipment. The mechanical services installed to resolve these problems are crucial, costing more than the building itself. It therefore seems appropriate that the architectural concept of the building reflects these characteristics.

After considering several design solutions, the idea of using metal horizontal louvres was developed to represent the highly technological industrial nature of the building. Louvres refer to the ventilation of the building and heat removal, essential technical aspects of all data centre design. The choice of the copper colour relates to the electrical requirements of the building. There is an enormous quantity of copper wires in the cables running throughout the building providing electrical power to the data centre.

Construction and other technical details 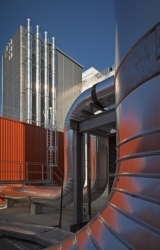 Technical equipment on the roof

The design and construction of the elevations is very carefully controlled, the attention to the construction details being rigorously followed to maintain the building’s sophisicated and highly technological image.

Further technical equipment, such as generators and chillers, are installed on the roof. A ramp connects the new extension with the existing building, which also has generators and chiller equipment on it. Taking into account the high visibility of the building from the surrounding area of Clichy, the railway and from the future urban park that is being developed, this plant equipment on the roofs must be given specific architectural design considerations, both in terms of the construction details and especially in satisfying the acoustic requirements in respect to the neighbouring area. In keeping with the lower part of the elevations, the roof components are hidden behind the same copper coloured horizontal louvres, masking the technical equipment from view. Furthermore, given that the interior of the building is full of computer servers and technical equipment, which are very sensitive to water and humidity, the waterproofing treatment of the roof must be of the highest quality. A multi-layer system has been specified, along with a SEDUM ‘green’ roof, a highly technical system which covers the roof in vegetation. This is in line with the essential need to consider sustainability within the architectural concept. 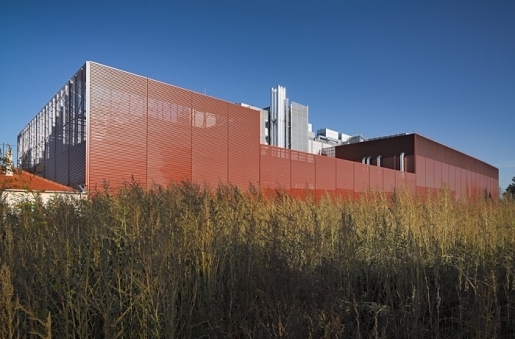