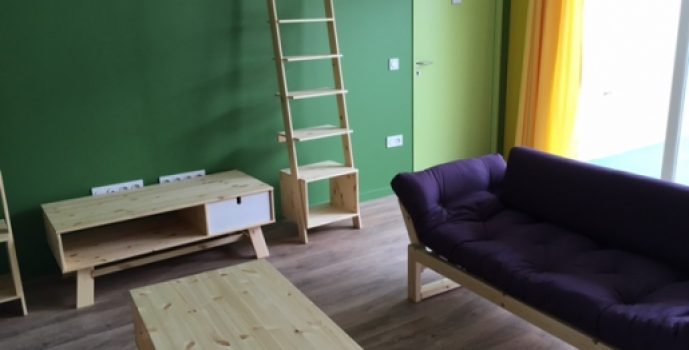 February 2016 at our Architectural Practice

For more than 50 years ACTION ENFANCE, a French children’s charity organisation, has welcomed, protected, educated and supported children at risk, throughout their early childhood into adult life.The Action Enfance Foundation manage a number of houses known as the Children’s Village (7 dwellings) and the Teen’s Residence in the town of Amilly in the Loiret region.

The Amilly Children’s Village was established in 2003 and has had a high occupancy rate since its opening. Recent building works and improvements have enabled its capacity to extend from 44 to 57 places. It was in this context that RB-Architects were asked to intervene on the mission to redesign the interiors of the houses: looking at the character and atmosphere within the houses and specifying the choice of furniture accordingly. The objective was to create a ‘real home’ environment where the children felt comfortable and to get away from the idea of feeling they were in an institution, especially important for new arrivals. The RB-Architect’s team, working alongside Vazistas Architects, decided on a concept of using lots of colour in the interior spaces to create a welcoming, warm and unique atmosphere in each of the dwellings. The furniture was chosen from numerous options available in the marketplace. It was important not surpass the tight budget, which was fixed, and being a charity organisation, this was non-negotiable. RB-Architects team also offered part of their services voluntarily, notably to assemble the furniture on site.